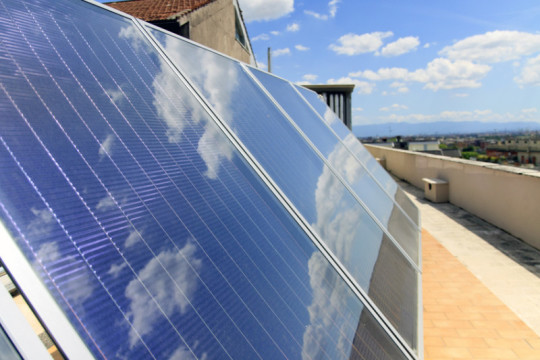 In 1922, Albert Einstein did not win a Nobel Prize for his theory of relativity. Instead, he received the Nobel Prize in Physics for his explanation of the photoelectric effect or how a light particle might deliver enough energy, all at once, to knock an electron off an atom and create an electric current.

This is what makes today’s solar panels work.

It is only in 1954 that anyone was able to make a solar cell that created enough current to actually run electrical equipment. Since then, a series of radical technological advances such as the discovery of gallium arsenide, the incorporation of indium selenide and the arrival of micro inverters have made limitless power possible.

As production costs continue to drop, the economics of producing solar energy are becoming more and more compelling.

Indium selenides, especially In4Se3, have recently been identified as promising high efficiency thermoelectric materials due to their extraordinary and tunable electrical and thermal properties. Developing high performance bulk materials with high conversion efficiency has been the central theme for large scale applications. High conversion efficiency has been reported for both In4Se3 single crystals and polycrystalline samples.

Microinverters are small inverters that convert the output from a single solar panel into electricity one can use in their home. When sunlight hits a solar panel, the panel creates DC (direct current) power. Because the electric grid uses AC (alternating current) power, and solar panels cannot create AC power on their own. A device called an inverter is needed to make the switch. While this new technology came out in 201, their price has been dropping over the last few years and the power rating has also improved. Micro inverters now account for over 30 percent of all residential installations.

Solar Growth Expected to Continue Through 2016

The U.S. Solar industry achieved another record year in 2014, growing by 34% over 2013 to install nearly 7,000 megawatts (MW) of solar electric capacity. Within the photovoltaic (PV) sector, over 6,200 MW of capacity was installed, led by the residential and utility segments, which grew by 51% and 38%, respectively.

Together, the solar industry installed 32% of all new electricity generating capacity in the U.S. – second only to natural gas. This growth is expected to continue, with an additional 20,000 MW of solar capacity projected over the next two years.